Sorry, you need to enable JavaScript to visit this website.

Among the Jewish composers who died in the Holocaust, or whose music was suppressed by the Third Reich, these two stand out for their productivity, the quality of their musical imaginations, and the unusual and fraught contexts in which they worked. Both were simultaneously exceptional and representative, and their teachers and associates include Debussy, Schoenberg, George Grosz and Alexander Zemlinsky. While both Schulhoff and Ullmann spent time in concentration camps and were killed by the Nazis, they were very different kinds of Jewish intellectuals: Ullmann was a committed follower of Anthroposophy who became an important music critic during his time in Terezin, while Schulhoff became a committed Communist, ending up in Würzburg, where he died of tuberculosis. Their compositions, incorporating everything from jazz to Dada, and from duodecaphony to national songs, are remarkable in their power and scope. The lives and activities of both composers raise questions about Jewish identity and Jewish music. Schulhoff wrote a Symphonia Germanica, a Sonata Erotica and a Sonata Eroica, and movements in Czech, Slovak and Gypsy style, but nothing “alla Hebraica,” while Ullmann was brought up as a Christian and only began to consider Jewish musical models while in Terezin, particularly in his final piano sonata.

This conference seeks to reevaluate the musical legacy of Ullmann and Schulhoff and their contemporaries, connecting it with other strands, themes and contexts in European culture. This will be a two-day event featuring both scholarly presentations and performances. 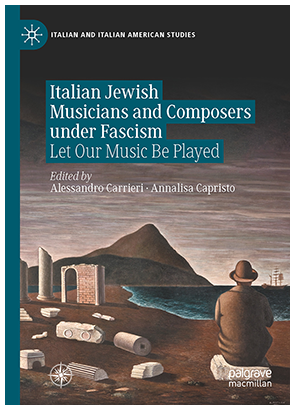 "This book is the first collection of multi-disciplinary research on the experience of Italian-Jewish musicians and composers in Fascist Italy. Drawing together seven diverse essays from both established and emerging scholars across a range of fields, this book examines multiple aspects of this neglected period of music history, including the marginalization and expulsion of Jewish musicians and composers from Italian theatres and conservatories after the 1938–39 Race Laws, and their subsequent exile and persecution. Using a variety of critical perspectives and innovative methodological approaches, these essays reconstruct and analyze the impact that the Italian Race Laws and Fascist Italy’s musical relations with Nazi Germany had on the lives and works of Italian Jewish composers from 1933 to 1945. These original contributions on relatively unresearched aspects of historical musicology offer new insight into the relationship between the Fascist regime and music."

read the first review of the book

This conference was made free and publicly accessible, thanks to the following: